Pilot Iroshizuku Inks - "Made in Japan"! 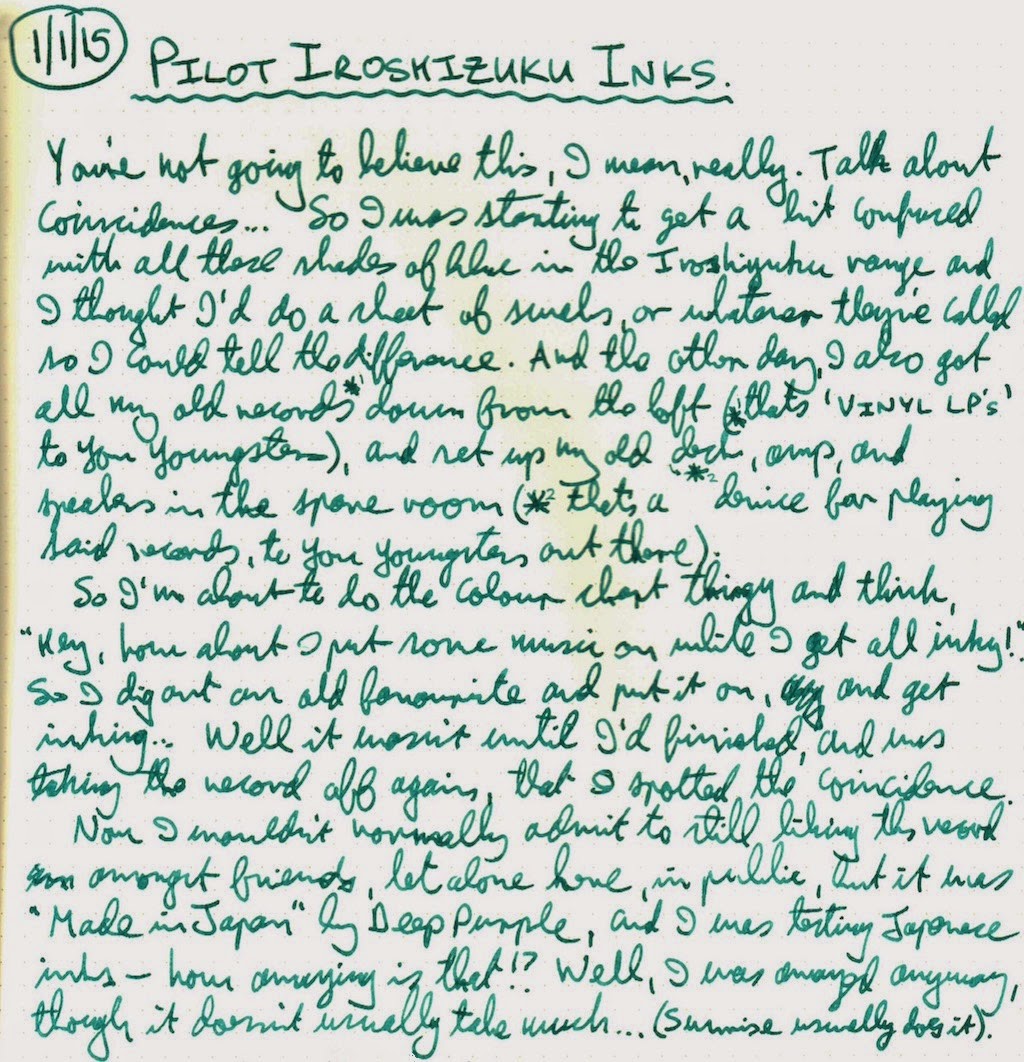 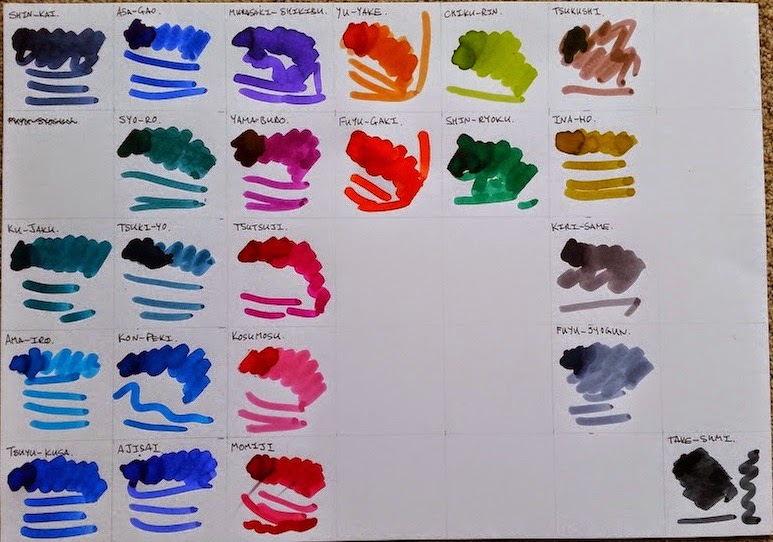 PS. Look at the sheen on that Yama-Budo. (And it's not often I get to say something like that!). 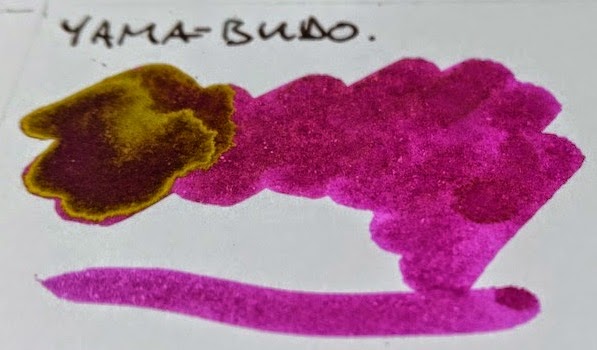 Just a ropey old shot of the complete collection. Cute aren't they :-) 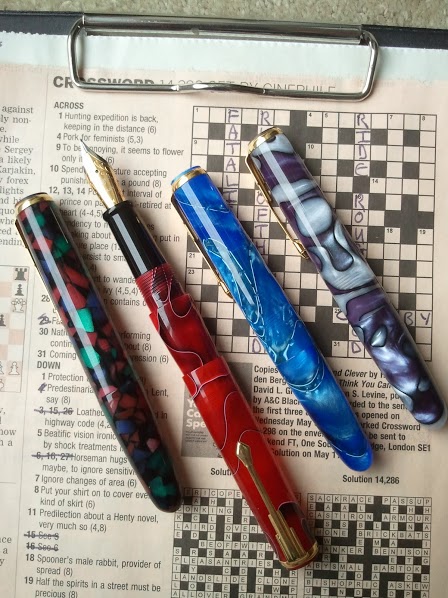 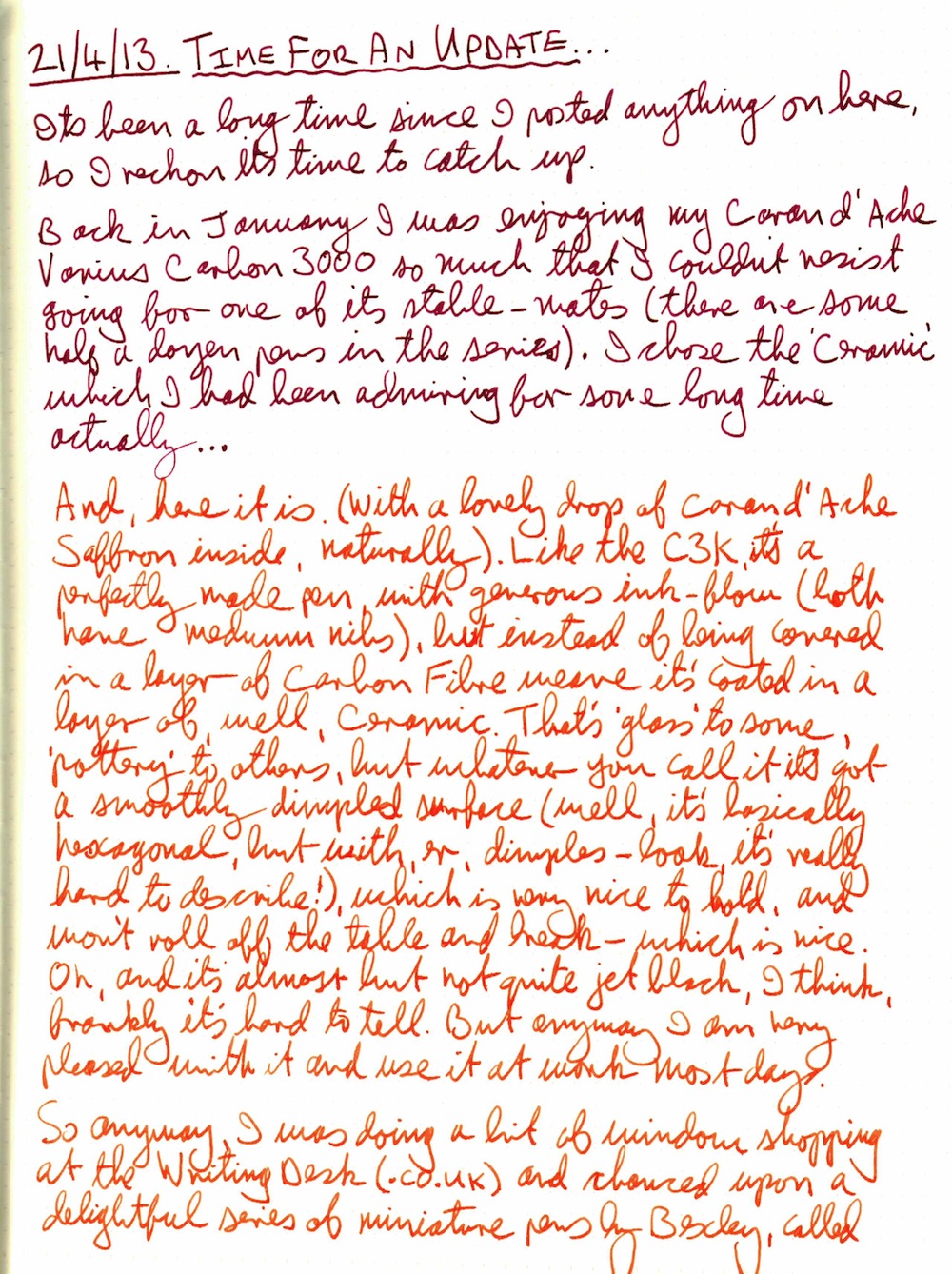 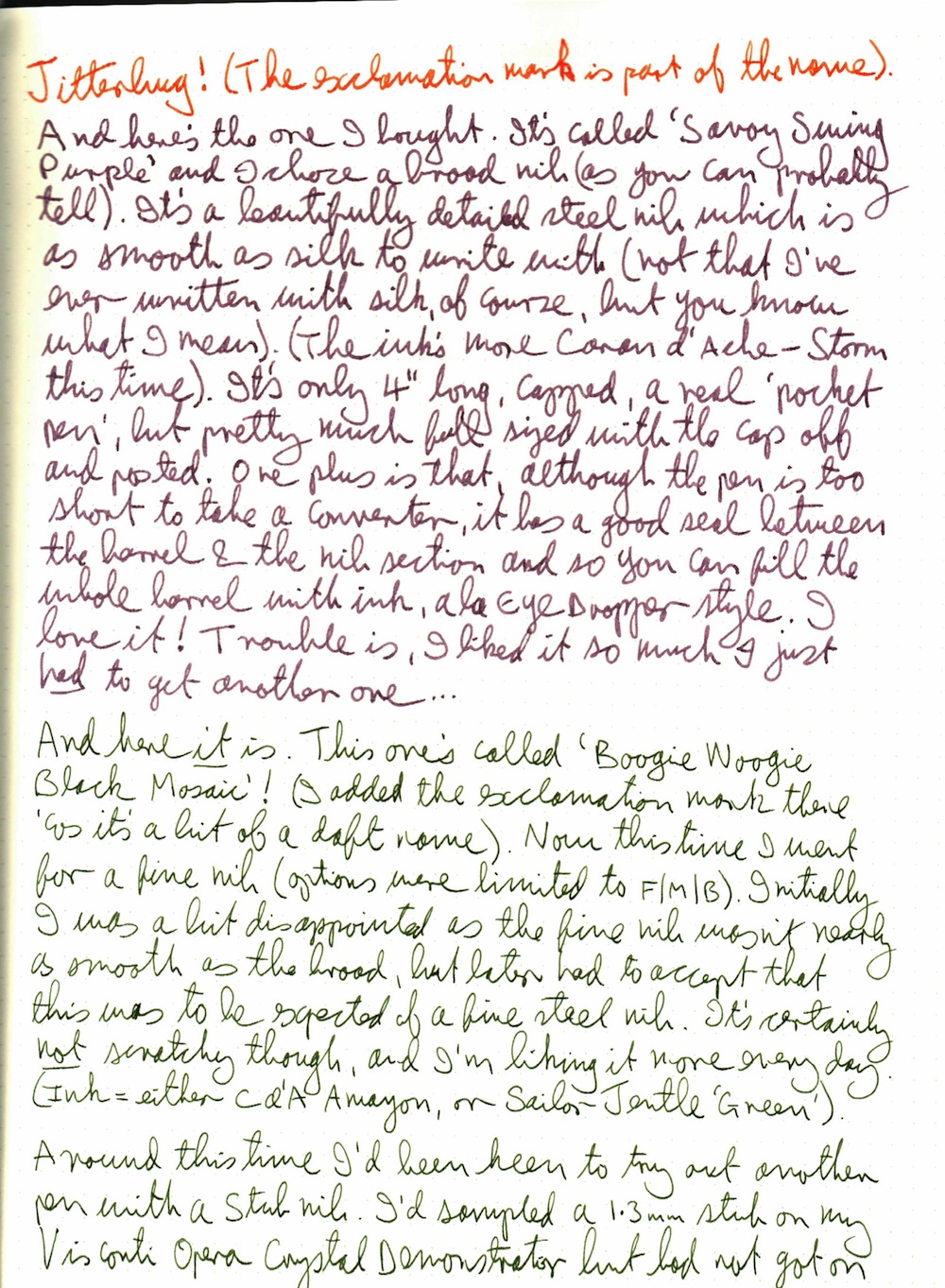 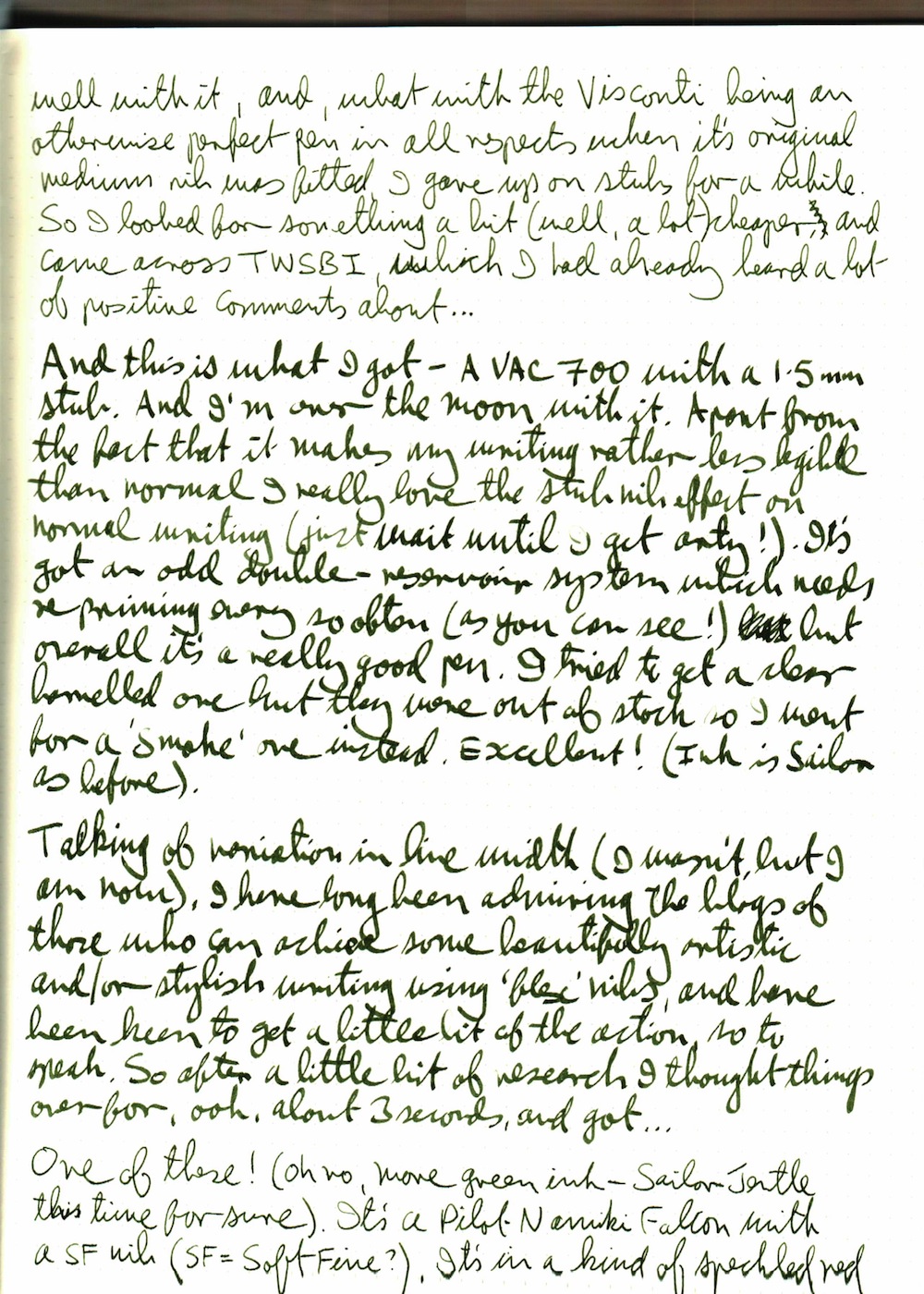 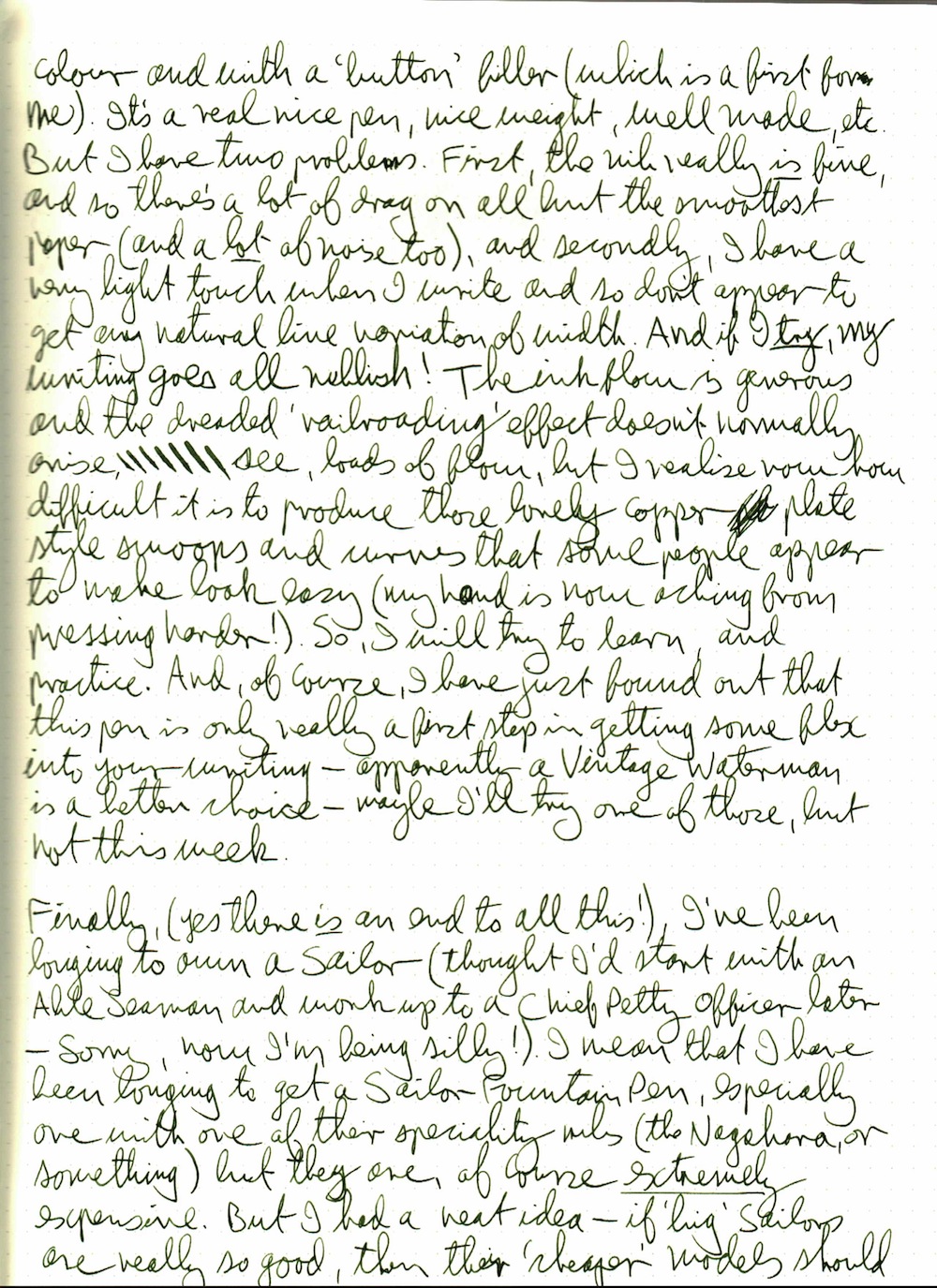 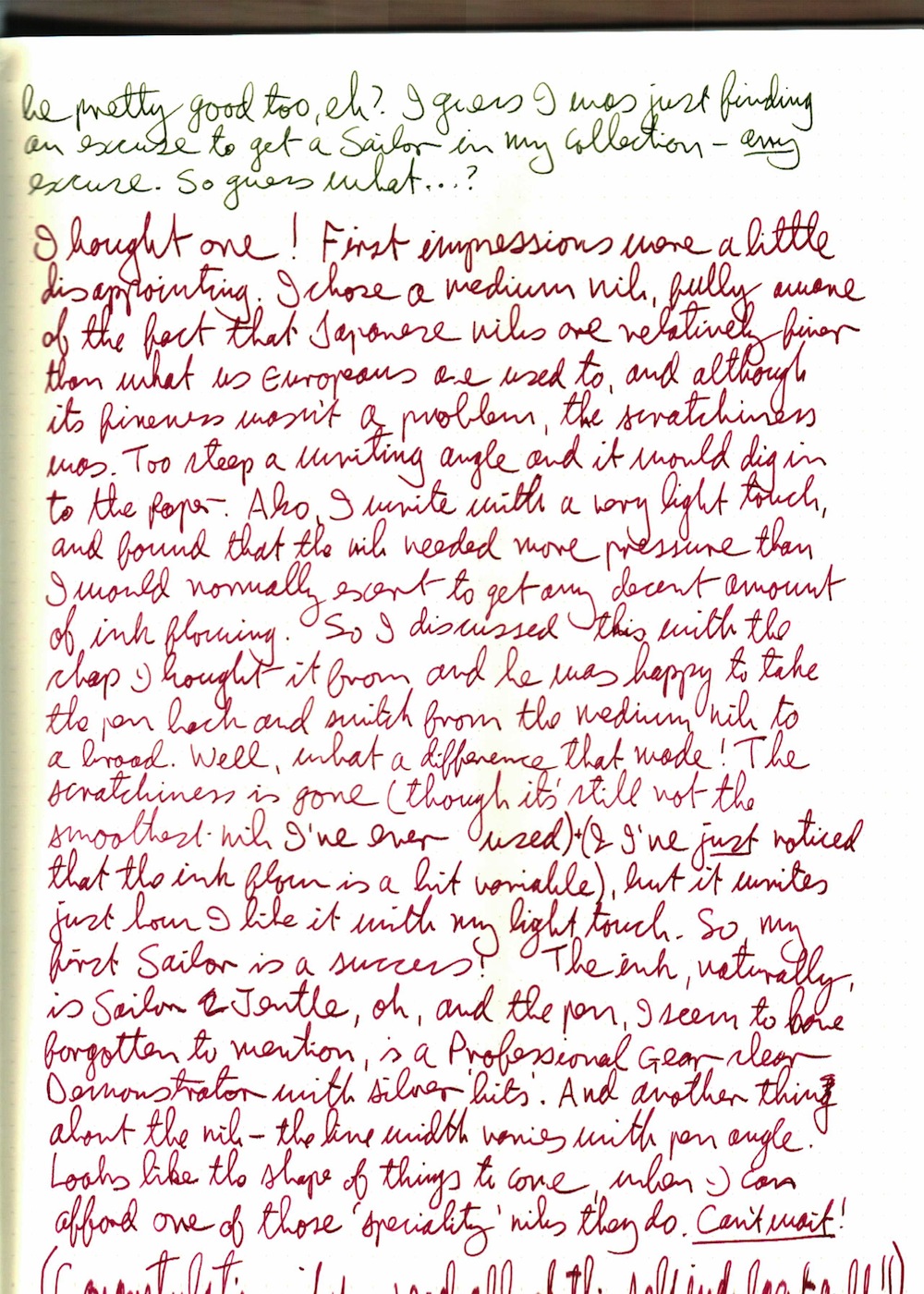 (Ooops, that last scan was a bit rubbish - the last line reads something like "Congratulations if you actually read all this self-indulgent guff"!)

A 'Flock' of Pelikans?

Is that the collective term? Yeah well, whatever. Alternative titles for this post would be;

So ok, the story is that I recently bought an M1005 Demonstrator off eBay and the nib didn't work too well so I thought "Hey, I can adjust that. I mean, how hard can that be?". The following picture shows how hard. Although the focus was a bit out you can still easily tell the 'adjusted' nib from the new one.

Anyway, the Demonstrator is back on my writing desk, and because while it was away I bought a regular M1000 body (in black - from Richards Pens) to hold the 3B nib I'm always banging on about, AND a 3-pen case (from The Writing Desk from whom I also bought my first M1000 - a stripy green one - originally with a Medium nib, but now with a rather scratchy but interesting OB nib, but I digress...), I thought why not do a gratuitous photo shoot of all three so anyone who's not seen them before can have a good look? Well, and just to show off of course...(actually, I really love these pens, and feel very privileged to have them, and, with all three in one case I do go a bit gooey when I get them out to use - sad, but true).

So, the photos (hope they're ok - getting the lighting, composition, and everything right is very hard with small shiny objects, especially in the UK in Winter...); 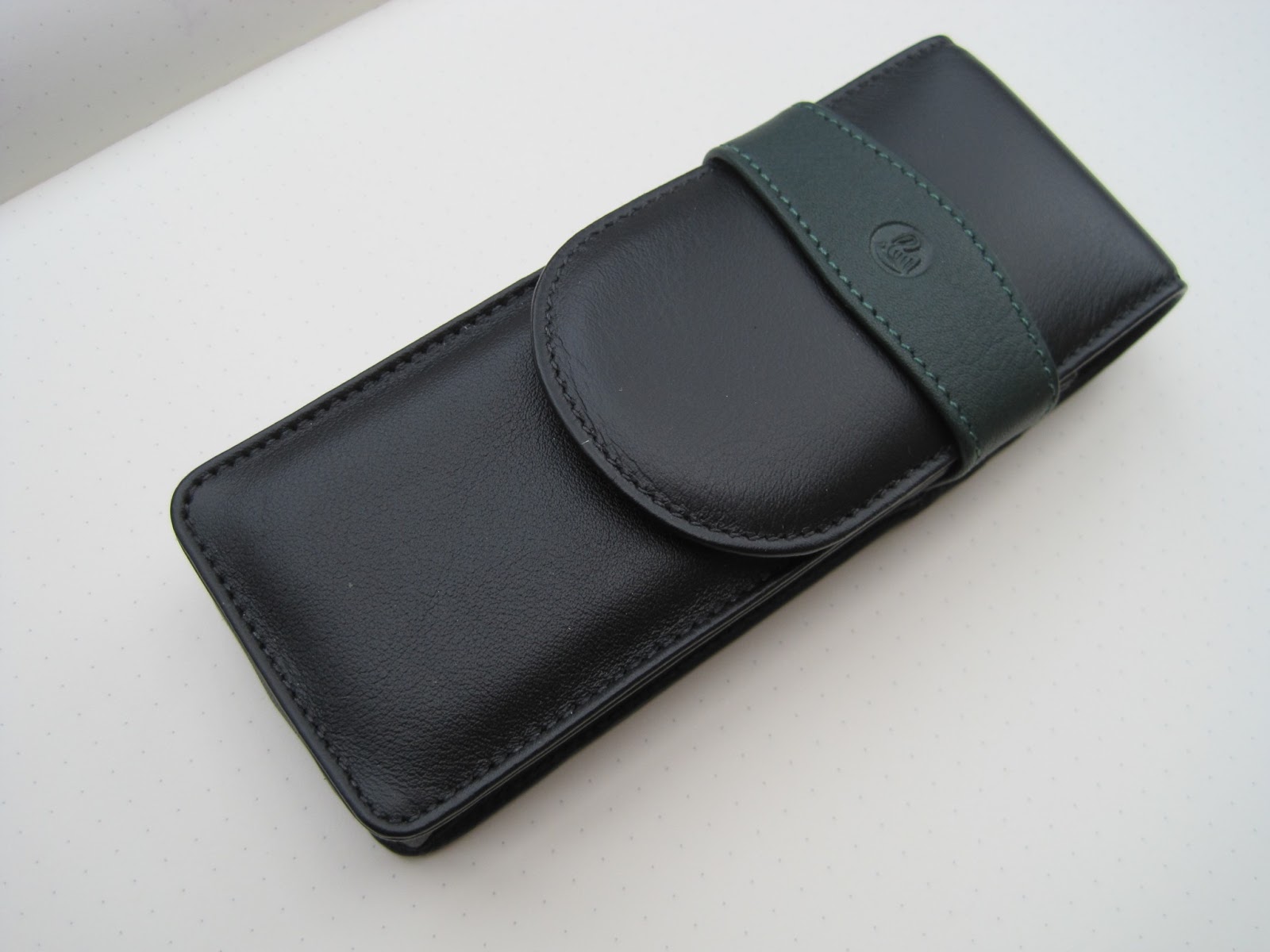 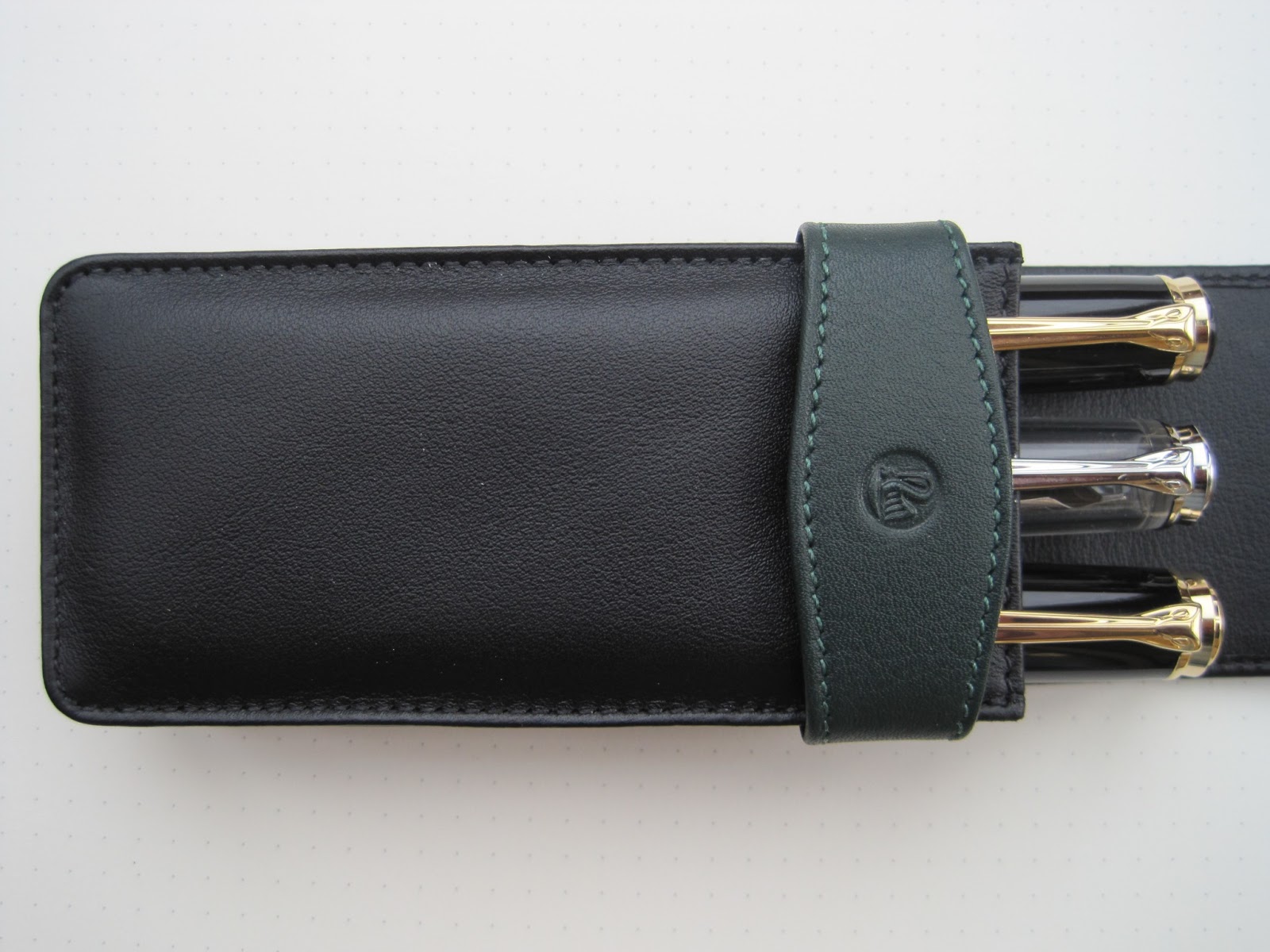 It is made from a (very) soft leather with internal dividers so the pens fit snugly but safely without getting scratched or anything. 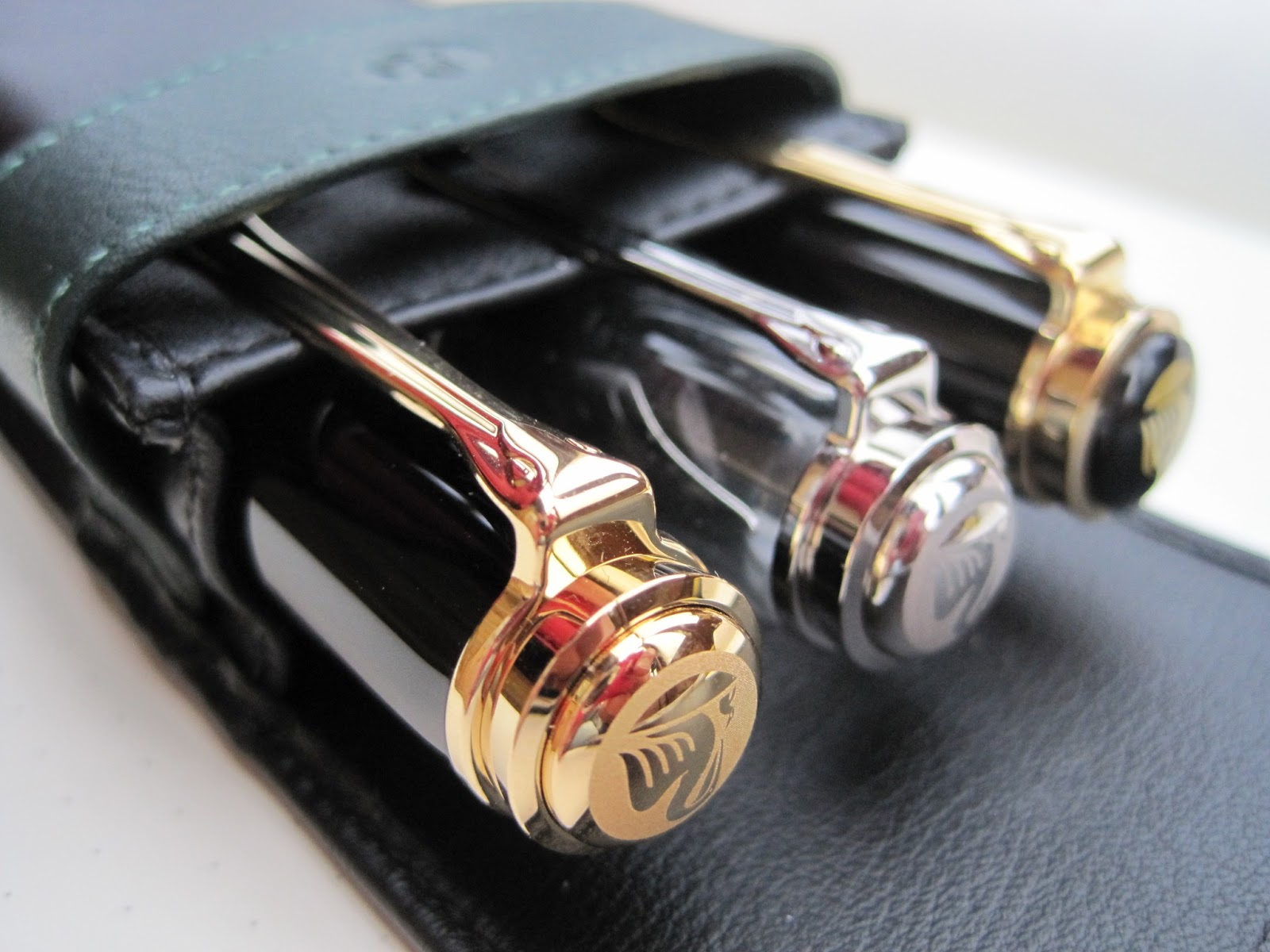 Pens clip over the edge of the case (or tuck inside if you want). 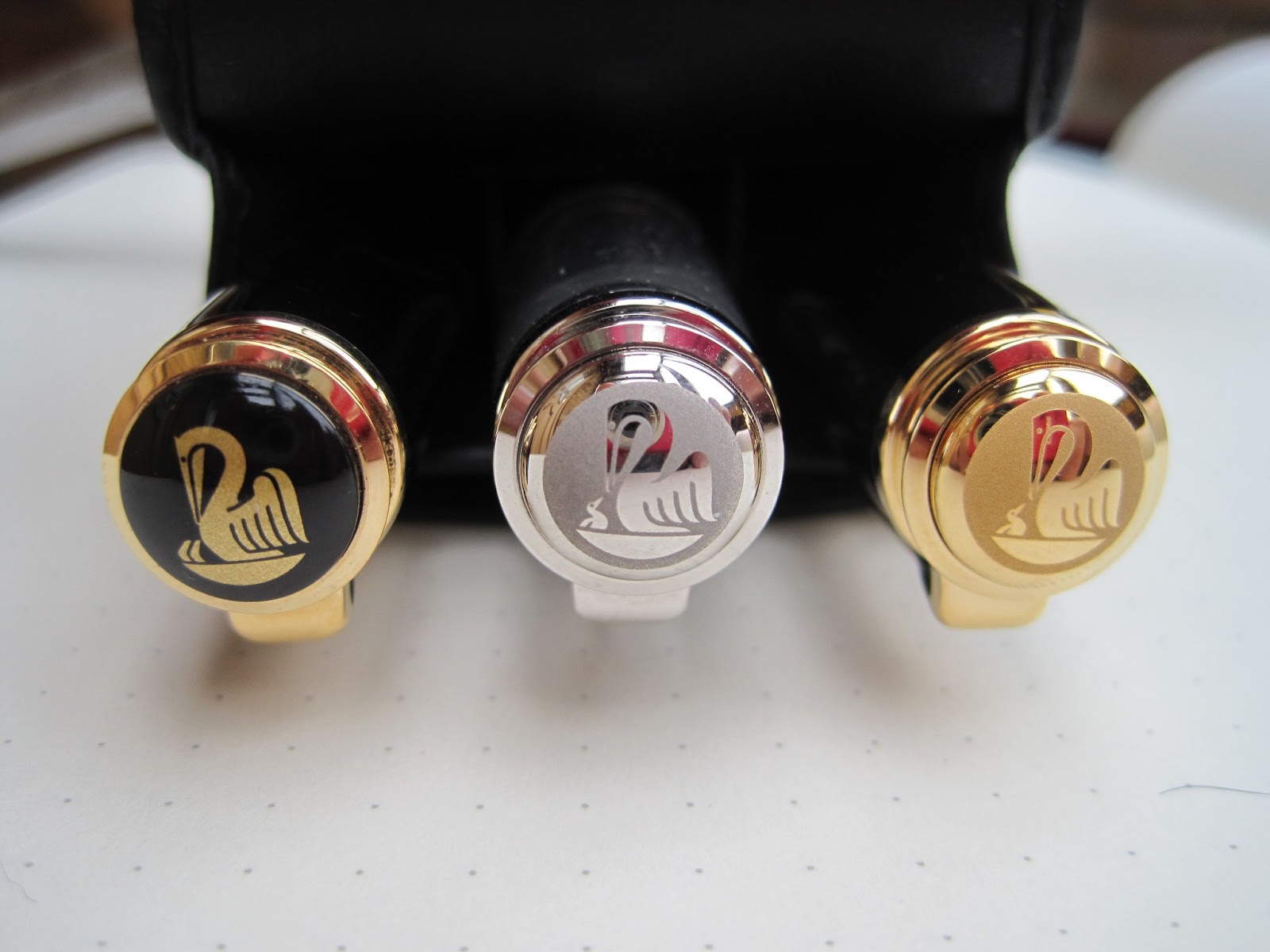 
And even more oooh now they're out in the open... 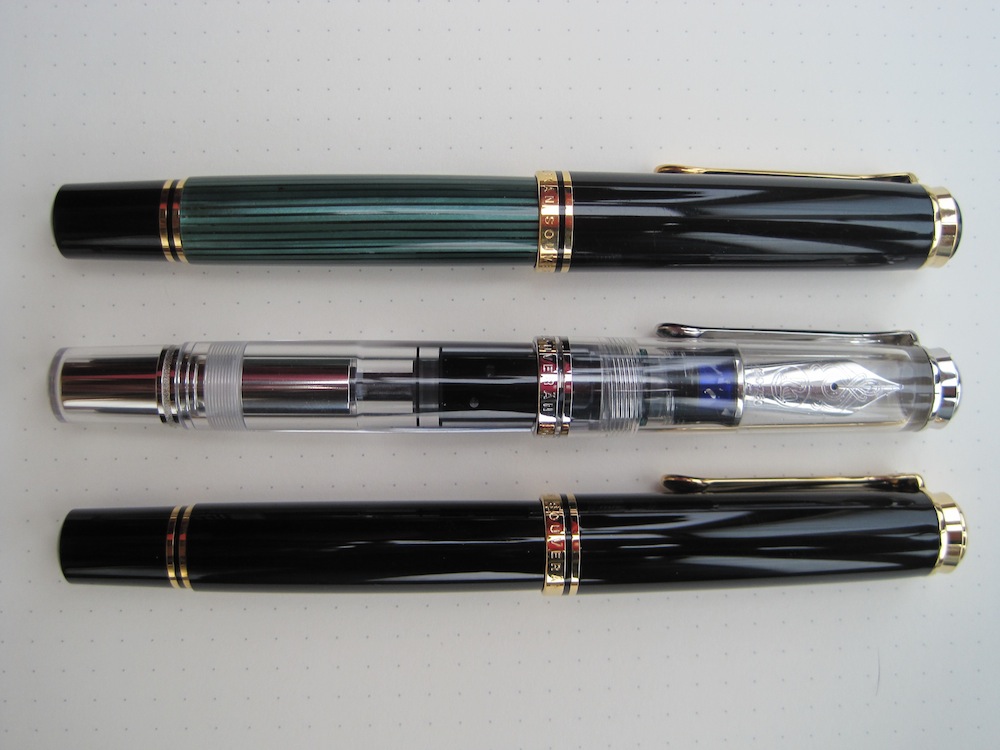 I can't take any more! 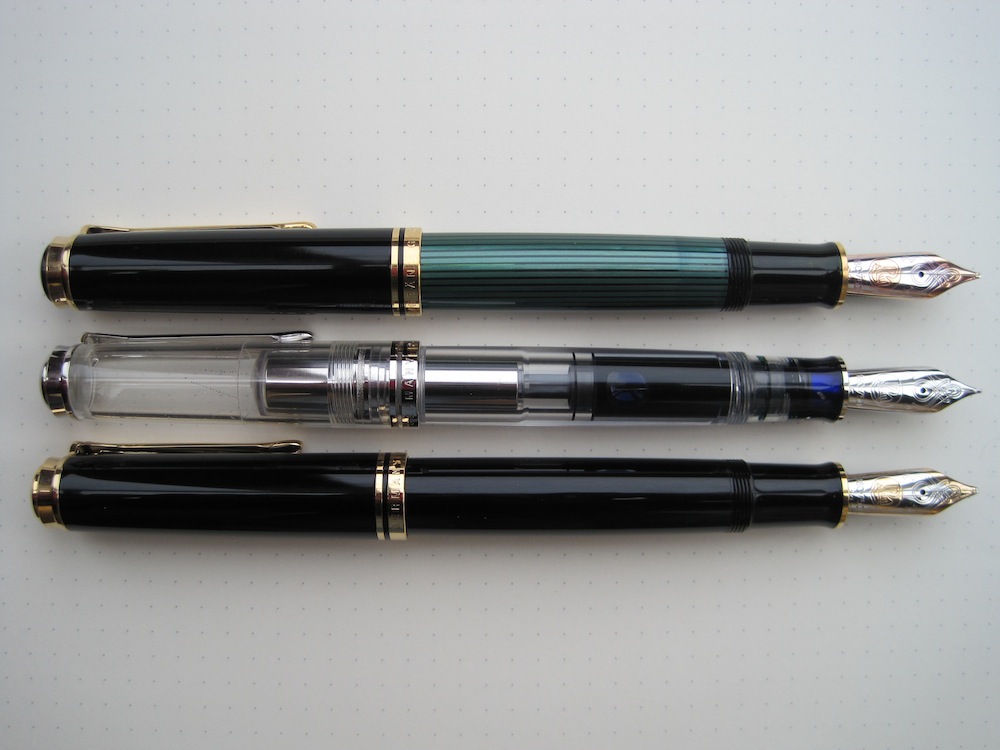 And a close-up of the nibs...phwoarrrr! 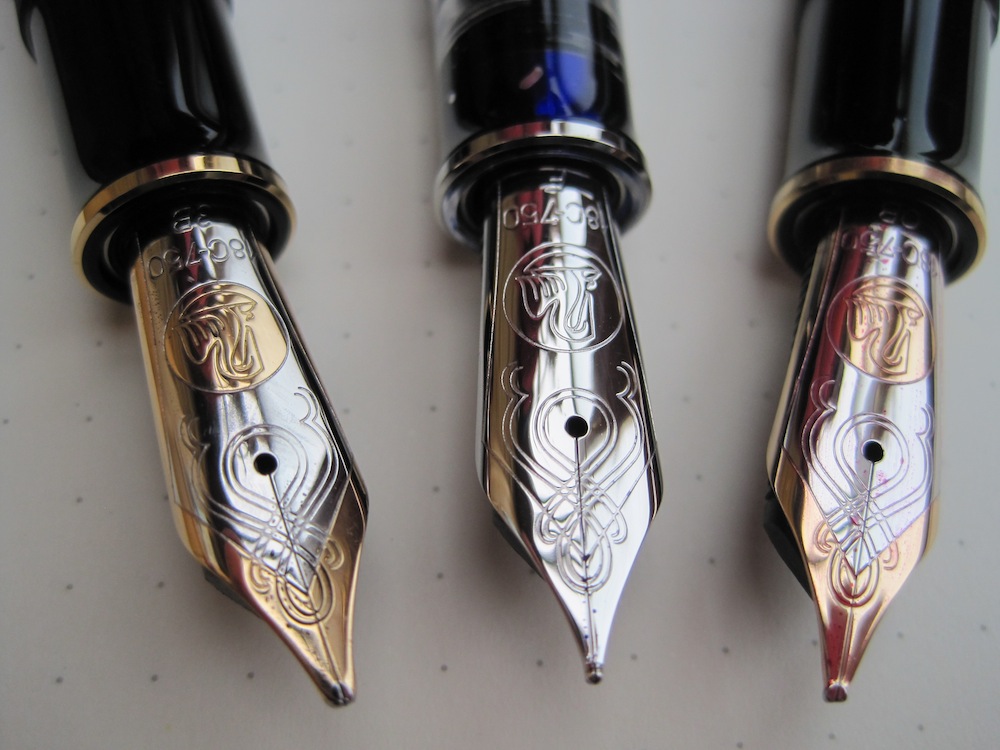 Ok, time to cool it down a bit... And write something...albeit a bit hastily... 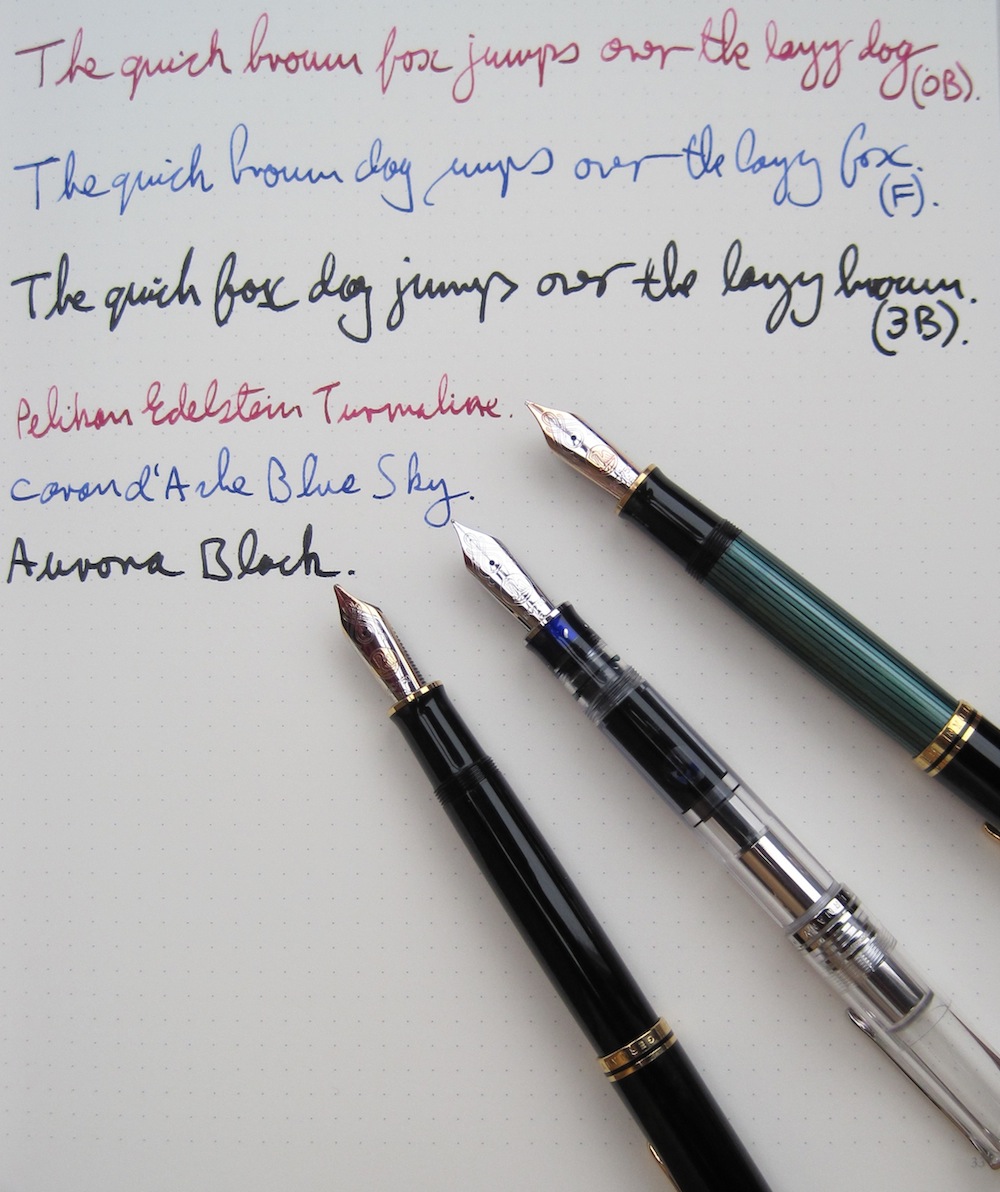 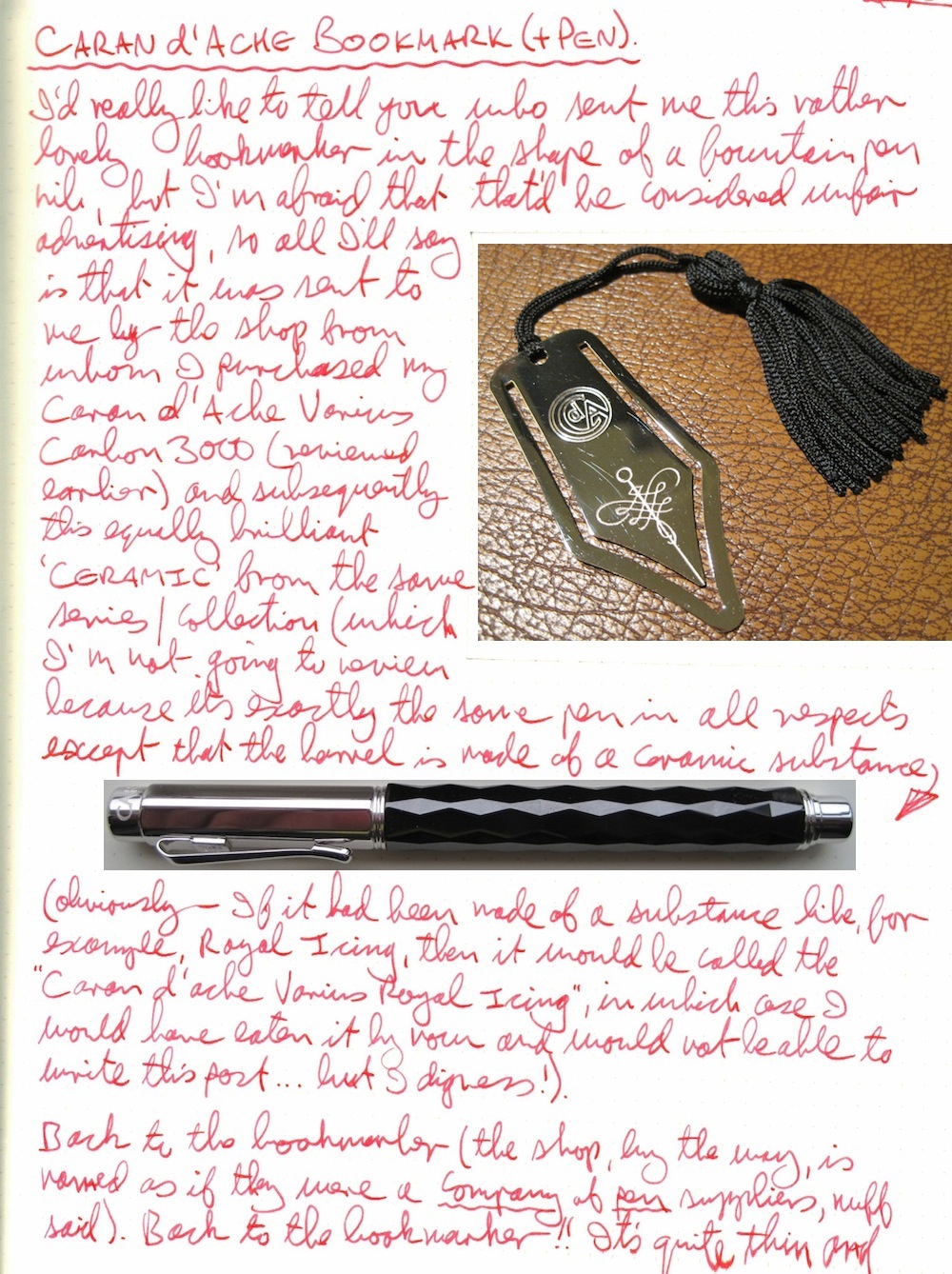 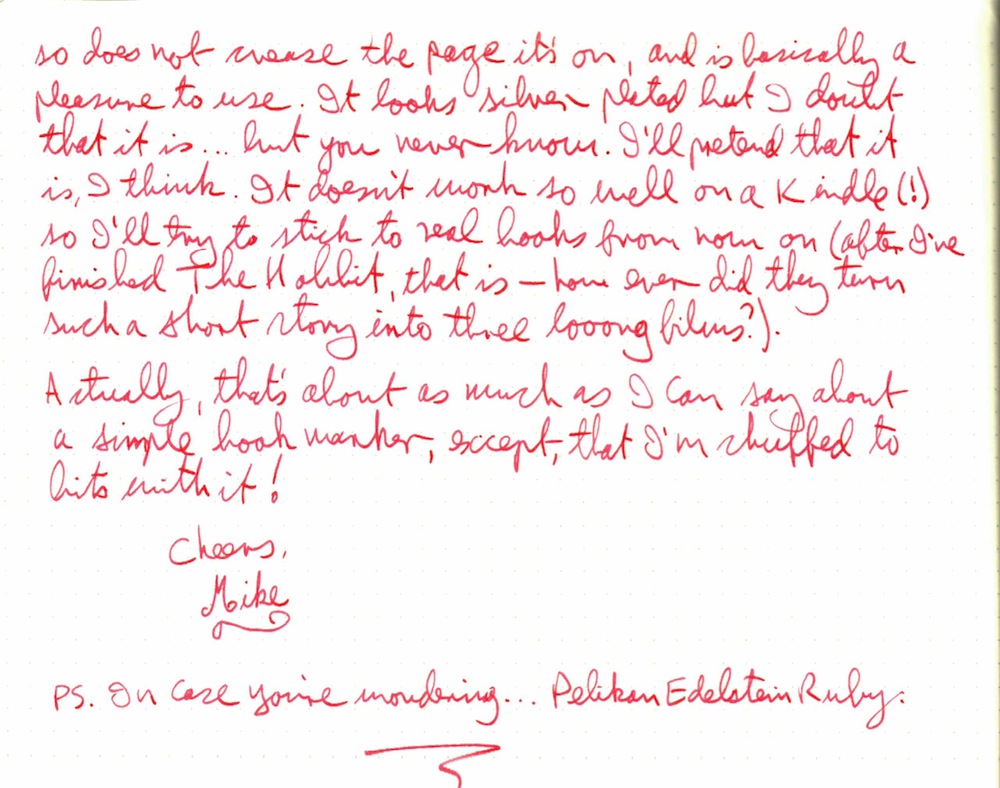 Just in case people thought that I wasn't eccentric enough, I have just ordered one of Diamine's new boxed sets of inks, with colours inspired(?) by famous composers!

I heard about them on another blog (Gourmet Pens) and couldn't resist. Expect a demonstration after Christmas... :-)

Well, what a mouthful that is, and I forget the meaning of the '3000' bit. Anyway, here's the review (with none of those profuse apologies I put in the last one - I resized everything to fit this time, though I still managed to lose the last line off the scanned pages - doh!), preceded by a picture, natch... 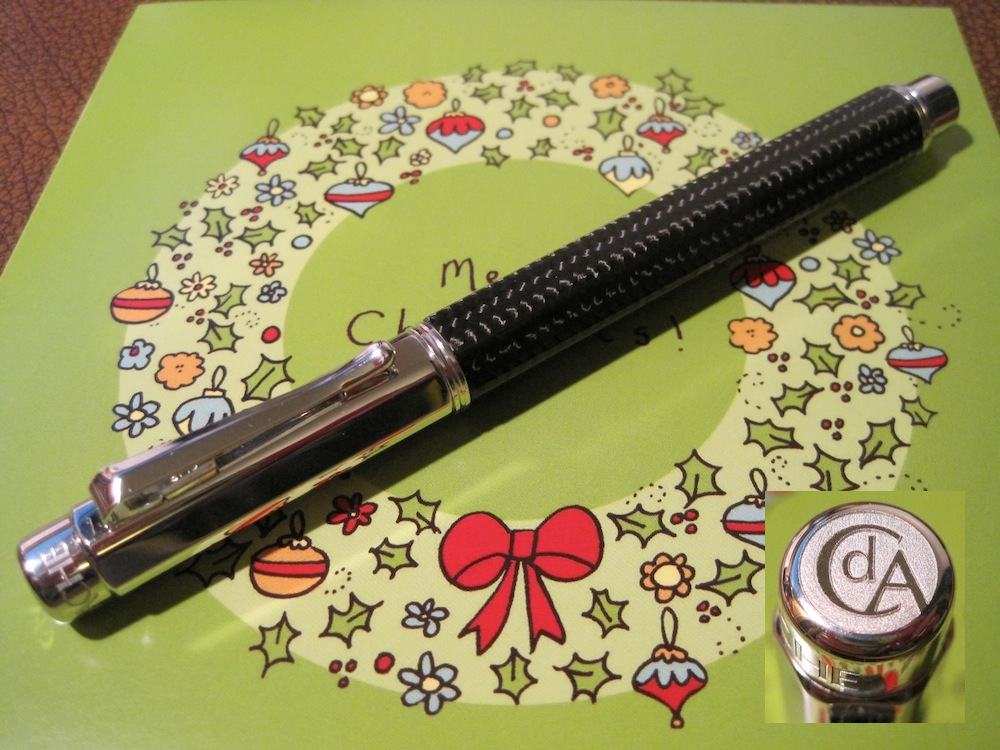 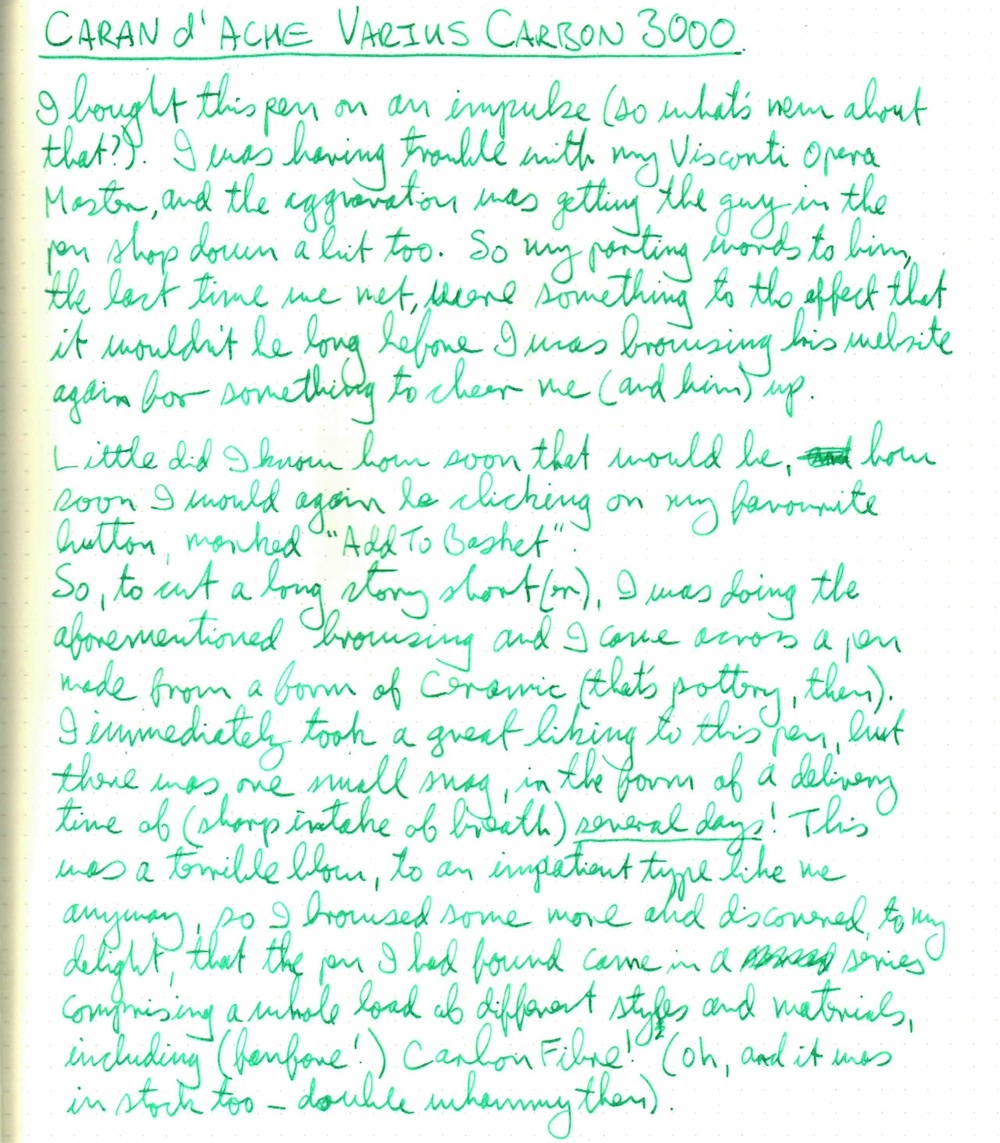 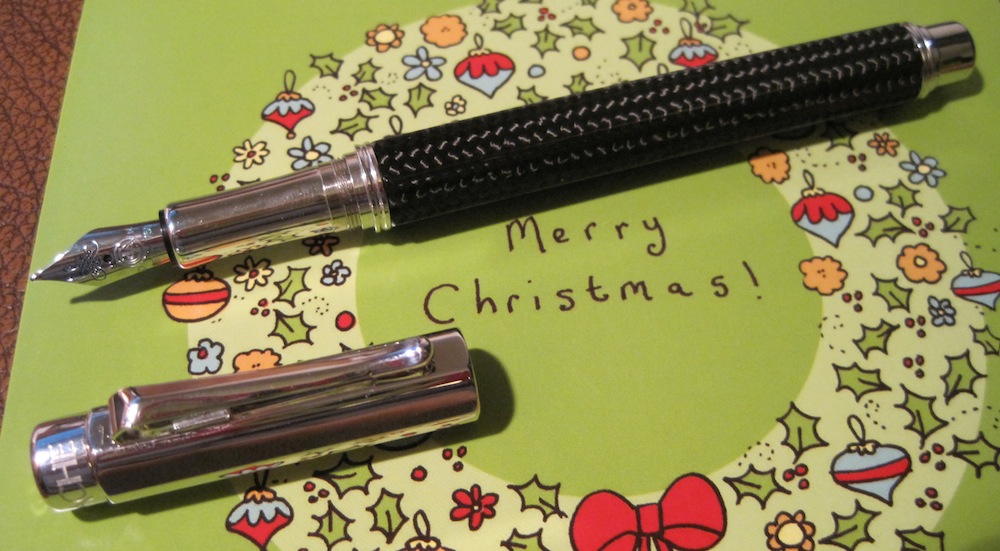 (unscanned text above reads, "I believe, with just a layer of CF weave wrapped around it,"). 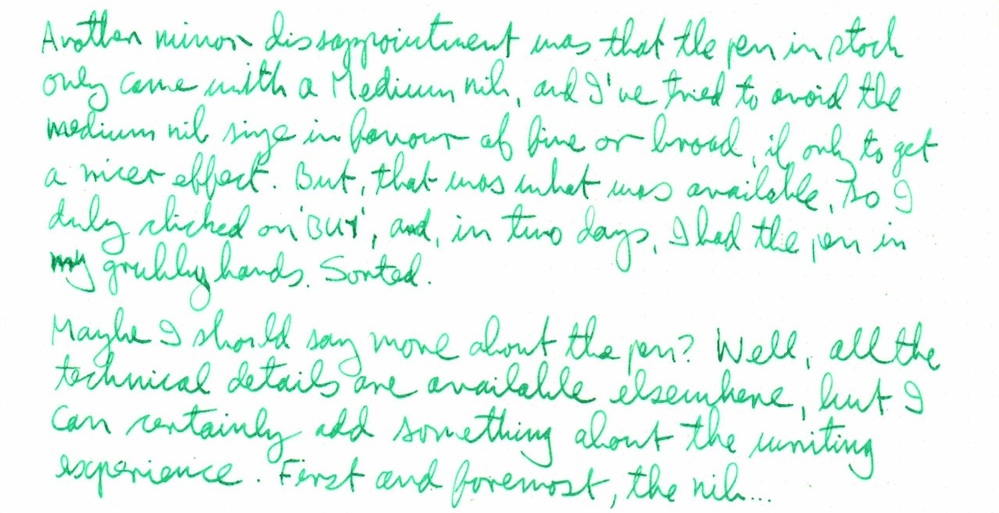 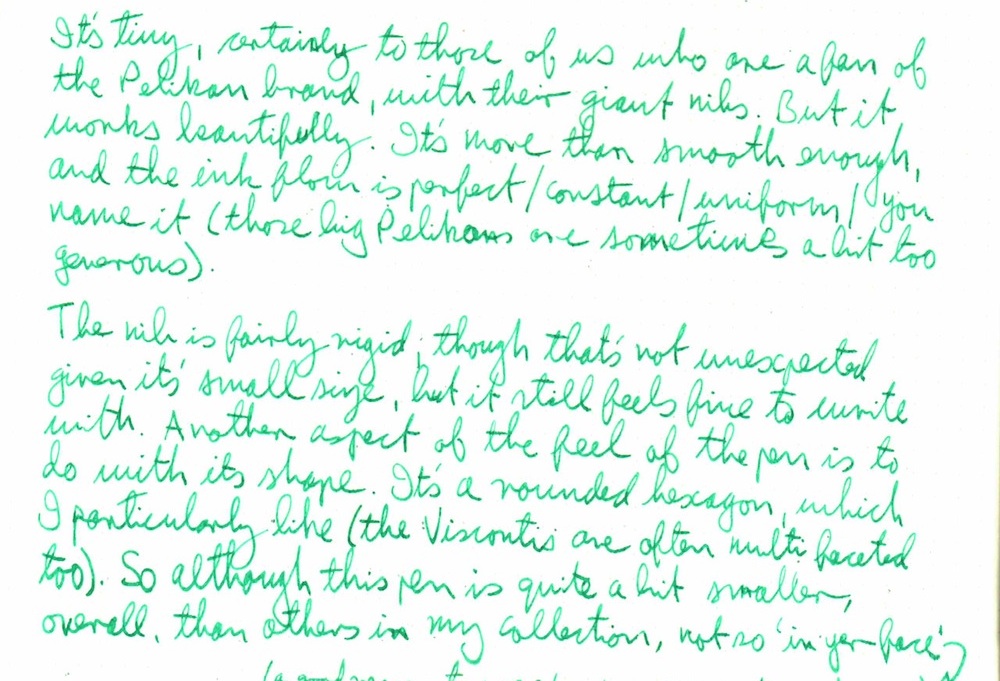 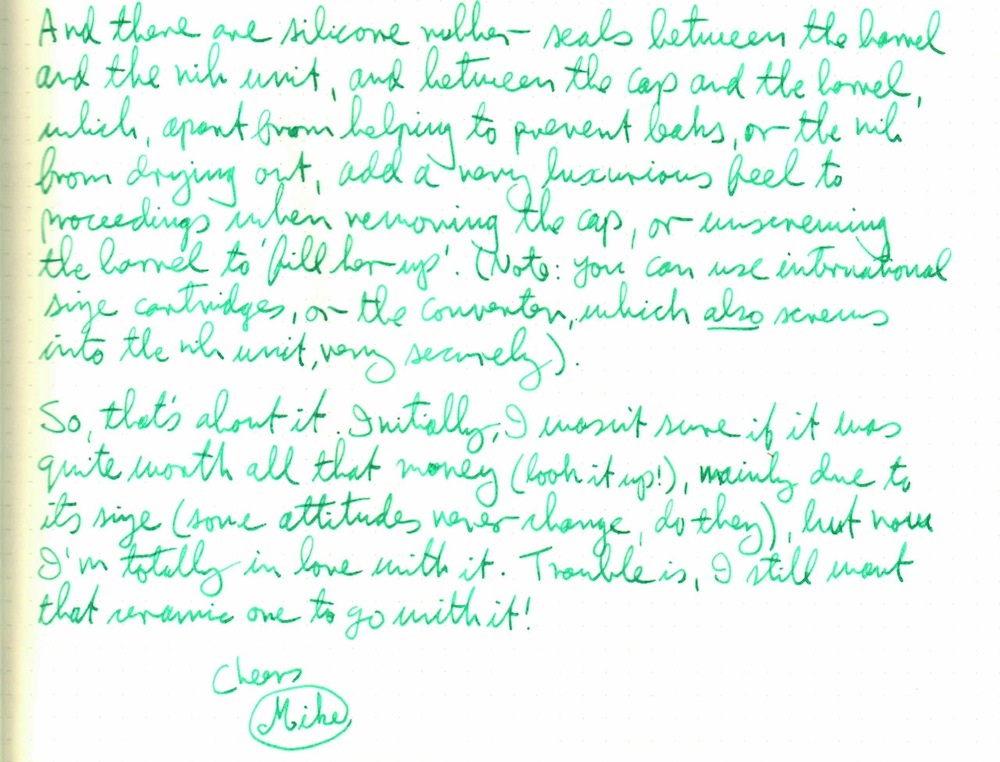 PS. Forgot to mention that the ink is Pelikan Edelstein Jade...